The aria from La Gioconda cuts like a knife through the hall, so razor sharp sung by Violetta Lazin 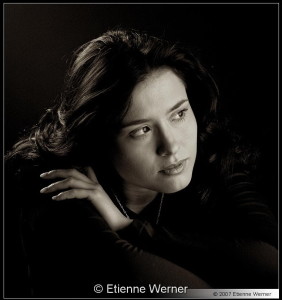 Born to a family with its roots in opera and theater she studied piano from the age of six. At 16 she had already won a First Prize and a Special Prize for Interpretation in a National Singing Competition of Yugoslavia and Third Prize at the International Competition Petar Konjovic.

She studied acting at the BK University in Belgrade in a class of prof. Rade Markovic.

In 1999 she came to the Netherlands to continue her studies at The McCray International Studio of Vocal Arts. Miss Lazin made her opera debut in the Netherlands in 2001 as Lola in Mascagni´s Cavalleria Rusticana alongside Frank van Aken. She also holds a bachelor and master degree in Music and Theater at the Fontys Conservatory in Tilburg in the class of E. Hoepelman.

As a student, she took part in much-acclaimed productions of Koen van Dijk in Sondheim´s: Into the Woods and Sweeney Todd. In 2005 she was to be seen in Amsterdam, Tilburg, and Gent as Carmen in Bizet/Brook production of Tragedie de Carmen directed by M. Krone.

Miss Lazin inherited love for the classical lied form her mother, well renowned lied interpreter in Yugoslavia, and as such continued the tradition performing (mostly) Serbian, Spanish, Russian repertoire. From 2010 she forms a duo with the Mexican pianist Juan Zurutuza.

In 2013 Miss Lazin was to be seen in the title role of the world premiere of Camille Claudel by Gianmaria Griglio in Italy. 2014 brought amongst others a role premiere of Elettra in Mozart’s Idomeneo.

2015 Miss Lazin was to be seen as Amelia in Verdi’s: Un Ballo in Maschera throughout Spain (Malaga, Murcia, Zaragosa, Cartagena etc).

In 2016 together with her partner Italian conductor and composer Gianmaria Griglio she founded ARTax Music based in The Hague Netherlands. The company already had several projects amongst which a slice-of-life-cabaret performance of My Name is: WOMAN: the show, performed also during the Amsterdam Fringe Festival 2016, received 4 stars from Theaterkrant.nl.

In 2018 she was to be seen in the title role of Bizet’s Carmen throughout China (adaptation by M. Carrasco) and thanks to the great success of the production the tour will be repeated in December 2019. Other engagements in 2019 include performances of Verdi’s Macbeth (Lady Macbeth) and Nabucco (Abigaille) and various chamber concerts throughout The Netherlands and Italy.